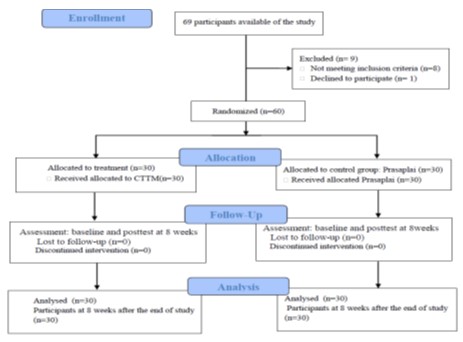 The present study aimed to compare the effects of court-type traditional Thai massage (CTTM) and Prasaplai in reducing primary dysmenorrhea. The experiment was carried out at Mae FahLuang University Hospital, Chiang Rai province, Thailand. The sample comprised 60 volunteers aged 18–25 years. The subjects were randomly assigned to the experimental group (n=30) or the control group (n=30). The former received 40 minutes of CTTM twice per week for eight weeks, while the latter was given two capsules of Prasaplai three times daily for three days starting from the first day of menstruation. Also, the participants’ symptoms prior to and after the intervention were evaluated in terms of pain intensity, pressure pain threshold (PPT), and tissue hardness. It was found that their pain intensity, PPT, and tissue hardness dropped significantly after the intervention (p<0.05). However, a comparison between the two groups after the intervention revealed no significant differences on any of the measures (p>0.05). Therefore, it can be concluded that both CTTM and Prasaplai herbal extract are likely to be efficacious treatment options for the alleviation of primary dysmenorrhea.