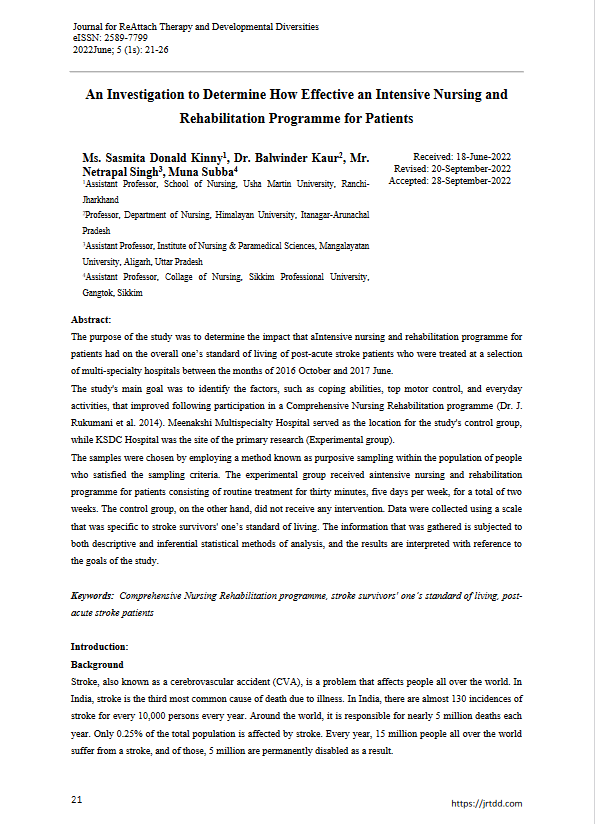 The purpose of the study was to determine the impact that aIntensive nursing and rehabilitation programme for patients had on the overall one’s standard of living of post-acute stroke patients who were treated at a selection of multi-specialty hospitals between the months of 2016 October and 2017 June. The study's main goal was to identify the factors, such as coping abilities, top motor control, and everyday activities, that improved following participation in a Comprehensive Nursing Rehabilitation programme (Dr. J. Rukumani et al. 2014). Meenakshi Multispecialty Hospital served as the location for the study's control group, while KSDC Hospital was the site of the primary research (Experimental group). The samples were chosen by employing a method known as purposive sampling within the population of people who satisfied the sampling criteria. The experimental group received aintensive nursing and rehabilitation programme for patients consisting of routine treatment for thirty minutes, five days per week, for a total of two weeks. The control group, on the other hand, did not receive any intervention. Data were collected using a scale that was specific to stroke survivors' one’s standard of living. The information that was gathered is subjected to both descriptive and inferential statistical methods of analysis, and the results are interpreted with reference to the goals of the study.