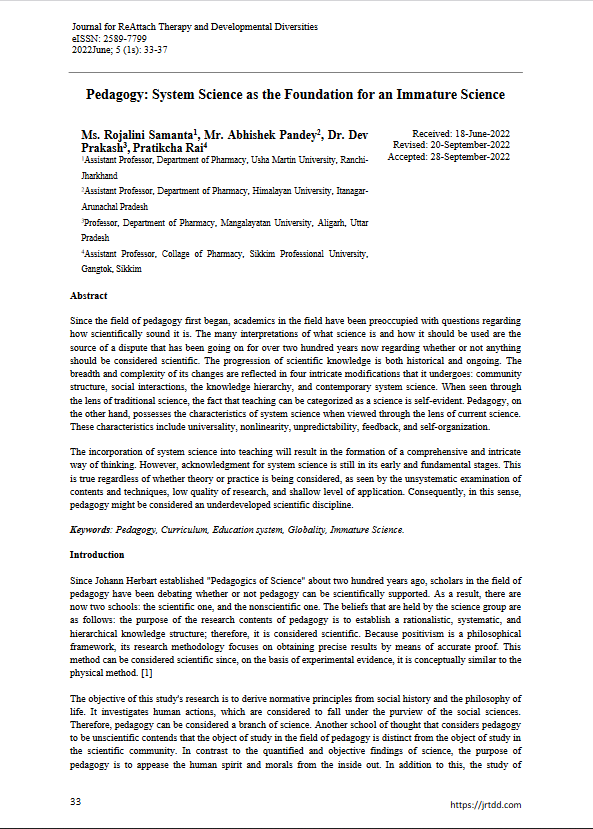 Since the field of pedagogy first began, academics in the field have been preoccupied with questions regarding how scientifically sound it is. The many interpretations of what science is and how it should be used are the source of a dispute that has been going on for over two hundred years now regarding whether or not anything should be considered scientific. The progression of scientific knowledge is both historical and ongoing. The breadth and complexity of its changes are reflected in four intricate modifications that it undergoes: community structure, social interactions, the knowledge hierarchy, and contemporary system science. When seen through the lens of traditional science, the fact that teaching can be categorized as a science is self-evident. Pedagogy, on the other hand, possesses the characteristics of system science when viewed through the lens of current science. These characteristics include universality, nonlinearity, unpredictability, feedback, and self-organization.

The incorporation of system science into teaching will result in the formation of a comprehensive and intricate way of thinking. However, acknowledgment for system science is still in its early and fundamental stages. This is true regardless of whether theory or practice is being considered, as seen by the unsystematic examination of contents and techniques, low quality of research, and shallow level of application. Consequently, in this sense, pedagogy might be considered an underdeveloped scientific discipline.