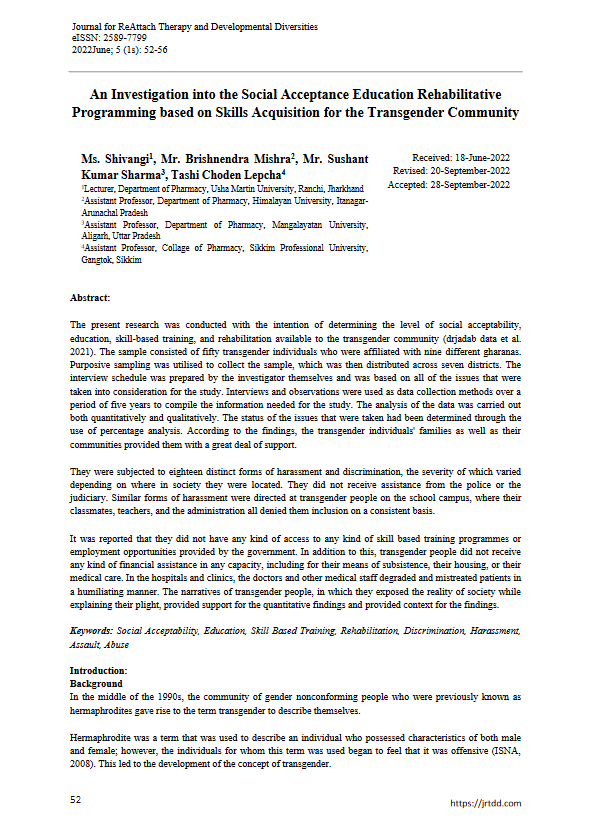 The present research was conducted with the intention of determining the level of social acceptability, education, skill-based training, and rehabilitation available to the transgender community (drjadab data et al. 2021). The sample consisted of fifty transgender individuals who were affiliated with nine different gharanas. Purposive sampling was utilised to collect the sample, which was then distributed across seven districts. The interview schedule was prepared by the investigator themselves and was based on all of the issues that were taken into consideration for the study. Interviews and observations were used as data collection methods over a period of five years to compile the information needed for the study. The analysis of the data was carried out both quantitatively and qualitatively. The status of the issues that were taken had been determined through the use of percentage analysis. According to the findings, the transgender individuals' families as well as their communities provided them with a great deal of support.
They were subjected to eighteen distinct forms of harassment and discrimination, the severity of which varied depending on where in society they were located. They did not receive assistance from the police or the judiciary. Similar forms of harassment were directed at transgender people on the school campus, where their classmates, teachers, and the administration all denied them inclusion on a consistent basis.
It was reported that they did not have any kind of access to any kind of skill based training programmes or employment opportunities provided by the government. In addition to this, transgender people did not receive any kind of financial assistance in any capacity, including for their means of subsistence, their housing, or their medical care. In the hospitals and clinics, the doctors and other medical staff degraded and mistreated patients in a humiliating manner. The narratives of transgender people, in which they exposed the reality of society while explaining their plight, provided support for the quantitative findings and provided context for the findings.