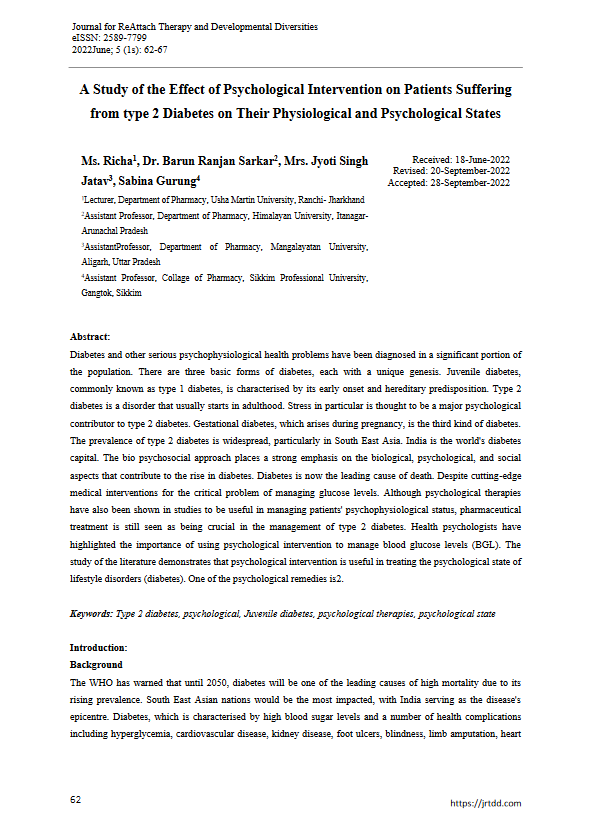 Diabetes and other serious psychophysiological health problems have been diagnosed in a significant portion of the population. There are three basic forms of diabetes, each with a unique genesis. Juvenile diabetes, commonly known as type 1 diabetes, is characterised by its early onset and hereditary predisposition. Type 2 diabetes is a disorder that usually starts in adulthood. Stress in particular is thought to be a major psychological contributor to type 2 diabetes. Gestational diabetes, which arises during pregnancy, is the third kind of diabetes. The prevalence of type 2 diabetes is widespread, particularly in South East Asia. India is the world's diabetes capital. The bio psychosocial approach places a strong emphasis on the biological, psychological, and social aspects that contribute to the rise in diabetes. Diabetes is now the leading cause of death. Despite cutting-edge medical interventions for the critical problem of managing glucose levels. Although psychological therapies have also been shown in studies to be useful in managing patients' psychophysiological status, pharmaceutical treatment is still seen as being crucial in the management of type 2 diabetes. Health psychologists have highlighted the importance of using psychological intervention to manage blood glucose levels (BGL). The study of the literature demonstrates that psychological intervention is useful in treating the psychological state of lifestyle disorders (diabetes). One of the psychological remedies is2.

How to Cite
Ms. Richa, Dr. Barun Ranjan Sarkar, Mrs. Jyoti Singh Jatav, Sabina Gurung. (2022). A Study of the Effect of Psychological Intervention on Patients Suffering from type 2 Diabetes on Their Physiological and Psychological States. Journal for ReAttach Therapy and Developmental Diversities, 5(1s), 62–67. Retrieved from https://www.jrtdd.com/index.php/journal/article/view/84
Issue
Vol. 5 No. 1s (2022): Special issue on Humanistic Relationship in the rehabilitation Sciences in Journal for ReAttach Therapy and Developmental Diversities
Section
Articles